According to the RED, EU Member States are required to fulfill at least 20% of its total energy needs with renewables by 2020 – to be achieved through the attainment of individual national targets. All EU countries must also ensure that at least 10% of their transport fuels come from renewable sources by 2020.

The Renewable Energy Directive sets out biofuels sustainability criteria for all biofuels produced or consumed in the EU to ensure that they are produced in a sustainable and environmentally friendly manner. Companies can show they comply with the sustainability criteria through national systems or so-called voluntary schemes recognized by the European Commission. The SSAP-RED is the voluntary scheme develop for the U.S. soybean industry.

There are two critical requirements of the RED that all recognized voluntary programs must address.

The SSAP-RED addresses the fundamental requirements of the RED legislation and related communications and guidelines from the European Commission. It focuses on the four pillars of the program: biodiversity and high carbon stock; production practices; health, labor and welfare; and continuous improvements. It defines the requirements for implementation of the mass balance and chain of custody process as well as the definitions and cross references to U.S. legislation.

SES LLC has chosen to implement a robust and lean governance system to ensure only RED compliant material is exported into the European market.

SES LLC is operating under the governance of the Secretariat and two statutory bodies, i.e. the Board of Managers (‘Board’) and the Sustainability Advisory Committee (‘Advisory Committee’).

The Board, as the ultimate decision making body, is comprised of 8 members from the industry, including traders, farmers and exporters. As such it takes fundamental decisions and provides guidance for the respective implementation measures. To its tasks belong the strategic positioning of the SSAP-RED program in the U.S. market, correct and timely handling of complaints, to ensure equal treatment of all economic operators, to safeguard its integrity, to ensure proper implementation through a certification system, etc. Some of the tasks can be delegated to the Secretary.

The Advisory Committee is currently comprised of 11 members representing multiple stakeholders from the industry, such as farmers, associations, academia and NGOs. Its task is to render advise to the Board especially for strategic matters but also with respect to proper assurance of the claims made under the SSAP-RED program. In case of a potential conflict of interest the Advisory Board will replace the respective Board member.

The task of the Secretary is to run the day to day business. This includes inter alia updating of the SSAP-RED program to ensure it complies with amended national laws and RED regulations, monitoring the activities of the Certification Body in order to maintain high quality standards, screening of complaints, acting as first point of contact for the SSAP-RED system users, preparing the Board meetings, preparing the financial accounting, etc. 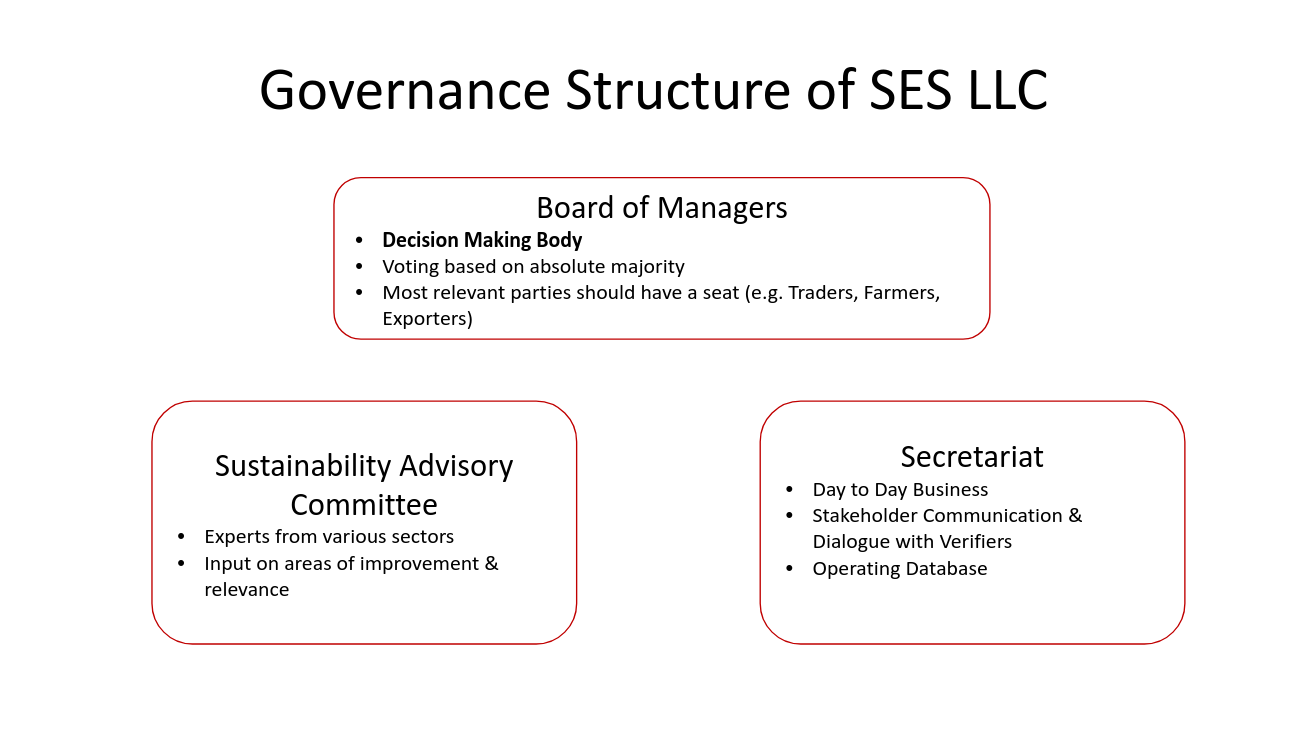 The following CBs are selected to perform the audits and issue certificates:

Recognition of other schemes

SSAP-RED recognizes all schemes that have been approved by the EC as voluntary schemes and are listed on the European Commission’s website https://ec.europa.eu/energy/en/topics/renewable-energy/biofuels/voluntary-schemes Therefore, US soybeans that have been certified against such scheme can be delivered into the SSAP-RED supply chain and will be marked as ‘SSAP-RED compliant’ material.

The U.S. traditionally exports whole soybeans to Europe. Crushed in Europe, the soybean meal, which accounts for about 80% of the beans, is used for livestock feed. The remaining soybean oil (19 % of the bean) is used in food service, food manufacturing, or industrial uses such as biofuels/energy.

Soybean oil from SSAP-RED certified beans can be used as feedstock for the production of biodiesel in the EU. This helps the EU reach their targets for renewable fuel under the RED.

The RED has specific restrictions on cultivation of biofuels feedstock from land that has been converted from any of three protected land categories: grasslands, forest and wetlands, including peatlands. It also has requirements on auditing and compliance, including independent third party review.

The SSAP-RED will use independent third parties to certify that the requirements of the RED are met.

How does it differ from the SSAP?

What about Greenhouse Gases?

The SSAP-RED uses the “default value” for soybean production, as calculated and recognized by the European Union.

Are all U.S. soybean exports to the European Union included in the SSAP-RED?

No. Only the soybeans certified under the SSAP-RED are eligible to be used as feedstock for biodiesel production in the European Union.

What is a mass-balance?

The mass balance principle is widely used in supply chains. It is very common that companies are handling soybeans with a certified claim simultaneously with soybeans without a certified claim. In order to avoid limitations in storage facilities, the certified soybeans can be mixed with those from farmers not participating in the program. This means that the sustainability claim can be disconnected from the physical soybeans, when mass balance calculation rules are followed, as per Article 18 1 in the European Renewable Energy Directive (RED):

(a) allows consignments of raw material or biofuel with differing sustainability characteristics to be mixed;

(b) requires information about the sustainability characteristics and sizes of the consignments referred to in point (a) to remain assigned to the mixture; and

To summarize: the main principle of mass balance is:

It has to be assured that the company owning the soybeans stored in a mass balance location never sells more soybeans with a SSAP-RED compliant claim than they have on stock within the relevant period.